My First Round Robin

One of my New Year’s pledges was no new projects until a few bins are empty, charity and gift quilts excepted. I did decide to join a Round Robin with 3 other quilters. Did I break my pledge? Technically, NO! Several years ago I started a paper pieced star that has four sections and 14 pieces per section. A little over the top, don’t you think? I had two sections already done, scrappy style, and just completed the other two sections. I’ve put them together and added a border and I love it! Oh – so many ideas for the center block of the Round Robin. This star was already started so it was the winner and a no-brainer! I’m really ahead of schedule. I even have the scraps and yardage in my box already and we don’t even need to have it done until the end of the month! 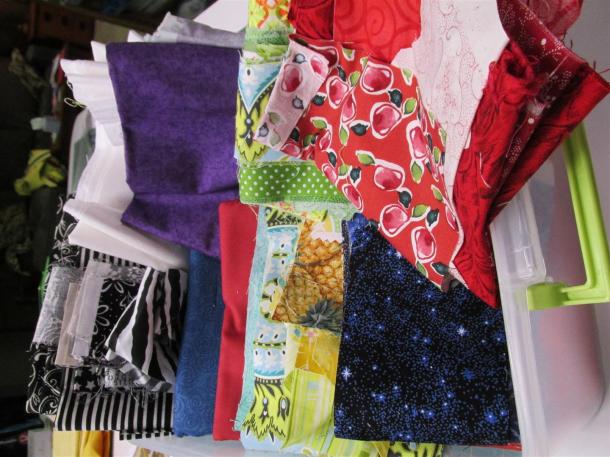 I’m excited to design and add borders to the other quilter’s blocks. Don’t know what a Round Robin is? Because we are a small group, we are doing it about every two months. We’ll exchange our project boxes and add a border to that quilter’s block. With just three borders being added, it could finish as a wall hanging. My block, however, is starting out at 14″ so it may be a bit too large for a wall hanging for me. After all three borders have been added, we may choose to add more to our own.

I am excited to try some inventive and creative borders. Borders can add so much to a quilt. Now, the math may end up being a bit challenging for me, but I’m no stranger to that dilemma. Enter husband help! Also, the other 3 quilters are truly talented – I’m a bit intimidated but am up for the challenge!

We got about 6 inches of snow here in NC Friday night which is a great event! I made two pots of soup and am enjoying watching the birds eat the seed I scattered on the driveway. We have bird feeders, but they fight and only allow one bird at a time. Now there have been up to a dozen feasting on the driveway and six different kinds of birds! We have Sparrows, Cardinals, Blue Birds, Thrasher, Finches, and Woodpeckers. Hubby spotted a Blue Jay. Wish I would see him – would be so pretty against the white snow. The rest of the day was spent in the studio sewing. Lucky me! Did you get snow as so many states did? How do you spend your snow days? Is it an event, or the norm, as it was when I lived in New York State?