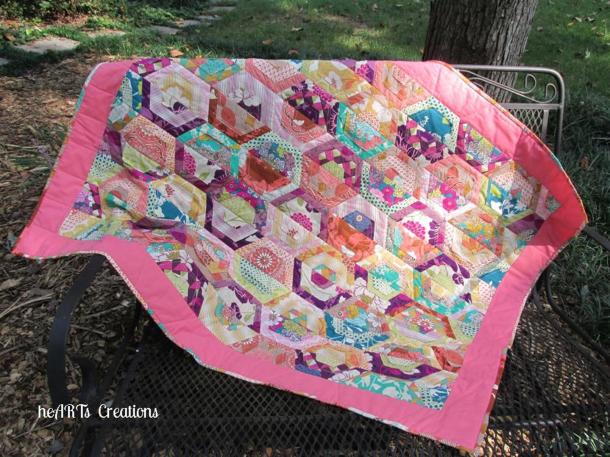 This will be my last hexie posting for quite some time! I had two packs of ten inch squares of a Joel Dewberry fabric that is so colorful. The fabric shouted for something fun and not too difficult. I cut hexagons in three different sizes. Layered some with two and others with three.

These were then straight stitched appliqued about 3/8″ from the edges. Each layered hexie was cut in half, point to point. Then the fun really began – to the design wall! I played and played then began sewing rows together. No “Y” seams as you can see by my illustration.

I had lots of scraps left and was adamant about not adding them to my scrap bins, so I began to “make fabric.” It made quite a sizeable panel for the backing. I like the back as much as the front of this quilt. This would make a nice child sized lap quilt, but for now, it is on one of my quilt racks. It makes me happy to look at it.